MoPOP Must Reads: Nosedive into Afrofuturism with 'Tuskegee Heirs'

Despite going down as “one of the worst incidents of racial violence in U.S. history,” most people had never heard of the Tulsa Black Wall Street Massacre.

At least, not until productions like Watchmen and Lovecraft Country brought the often-forgotten tragedy back to the forefront of conversation.

That’s the true power of Afrofuturism in pop culture. It can introduce us to the injustices of our past while contextualizing the present. It can empower the descendants of victims to become the storytellers of today. And it can create an inspiring and better vision for the world tomorrow.

For those who don't already know, Afrofuturism seeks to infuse black history and culture into literature and film with futuristic or sci-fi elements.

If you’re hoping to get your Afrofuturism geek on, I highly recommend Tuskegee Heirs: Flames of Destiny. Set 80 years in the future, the sci-fi comic book follows “a squadron of young, gifted aviators, who are forced to become Earth’s last line of defense against a menacing race of artificially intelligent villains bent on destroying civilization.” 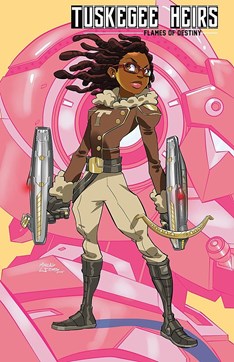 Created by Greg Burnham and Marcus Williams, the series was inspired by the real-life story of the World War II fighter pilots, the Tuskegee Airmen. The creators hoped to introduce young readers to the history of aviation and, more importantly, pay homage to the black heroes and heroines within it.

Who were the Tuskegee Airmen?

At a time when the United States military was segregated by race, African Americans who wanted to be pilots were rejected. However, in 1939, Congress, reacting partly to pressure from activists and partly from increasing tensions that would lead to World War II, passed a law that would allow African American pilots to be trained, albeit while keeping the segregation policy in place.

This resulted in the creation of all black Fighter Groups. All of them were incredible, but one group went on to become the storied, heroic, and revered Tuskegee Airmen, also known as the Red Tails — servicemen who proved that African Americans pilots were just as brave, bold, and capable as their white counterparts. 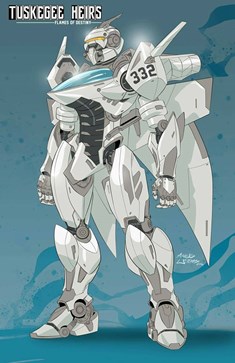 This real-life story, reimagined through the lens of its comic book-loving creators, provides a perfect example of how creative minds can masterfully use Afrofuturism to educate, enlighten, and empower young readers. Tuskegee Heirs: Flames of Destiny perfectly balances history and science fiction to build an engaging and exciting world filled with black cultural aesthetic.

Whether you’re a long-time Afrofuturism fan or just Afrofuturism-curious, Tuskegee Heirs: Flames of Destiny is definitely worth a read. The series is only four issues in, so catching up shouldn’t be too difficult. I personally own all the issues in the series, including an autographed limited-edition copy I hope to give to my son when he is older.

Check out the series on the official Tuskegee Heirs website.

Kwapi Vengesayi is the Manager of Community Engagement at MoPOP, and a fan and student of all things Motown, Afrofuturism, and Star Trek.